The aim with King Chulalongkorn Memorial Amateur Radio Society in Ragunda, Sweden is to offer radio amateurs visiting the Thai Pavilion the possibility to gain contact with radio amateurs around the world using the special signal SI9AM from the summer of 2000.

SIAM was the name of Thailand before 1939.

The number 9 is a lucky number for all Thais.

The Radio Station was closed down December 1, 2020.

BACKGROUND FOR FORMING OF SI9AM

In the summer 1995 an idea was born to form King Chulalongkorn Memorial Amateur Radio Society in Ragunda. We contacted the leading radio amateurs i Thailand and their representatives in RAST, Thailand (the equivalent to SSA, Sveriges Sändareamatörer) We decided to form a "Visitor´s Amateur Radio Station" in Ragunda.

Already at an early stage we had an ambition to get the signal SI9AM. In July 1999 we had confirmation from PTS, the Post and Tele communication Board, that our association had been granted the signal SI9AM.

Radio amateur clubs in Gävleborg laen, Jämtland laen and Västernorrland laen can be members of the society. Members at this point: 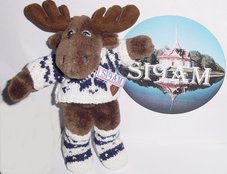