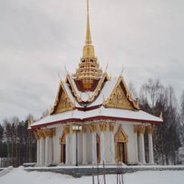 In Utanede there exists the only Thai Pavilion in the world outside of Thailand. It has already been visited by tens of thousands of people. The story starts in 1897 when our Swedish-Norwegian King Oscar II invited King Chulalongkorn of Siam , as it then was, to the art and industry exhibition in Stockholm.

Thai Pavillion The Thai pavilion is probably also the only one that stands covered in a beautiful mantel of snow for al large part of the year.

During June until August the Thai Pavilion is open. During the remainder of the year tours for groups are arranged. These must be booked in advance.

THE STORY OF THE THAI PAVILION 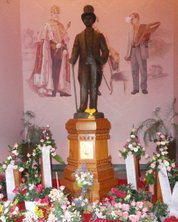 Thai Pavillion In 1897, King Chulalongkorn of Siam (present-day Thailand) visited Sweden and Ragunda municipality. Almost exactly one hundred year later, the construction of a memorial building in honour of the King was commenced. This is the story of the Thai pavilion in Utanede

In 1868, King Chulalongkorn ascended the throne of Siam. He was a loved and admired king, not least because he abolished slavery in his native country.

He was very dedicated to the development of his country, and he worked hard to give it a modern structure. This work took him many voyages around the world.

When the Swedish/Norwegian King Oscar II sent King Chulalongkorn an invitation to the International Art and Industry Fair in Stockholm he accepted.

King Oscar also wanted to how other parts of Sweden than Stockholm, and since the Swedish sawmill industry was interesting to King Chulalongkorn, he chose the middle parts of northern Sweden. There was beautiful scenery with bright summer nights and impressive waterfalls. King Chulalongkorn was also interested in the modern Swedish traffic, both on water and on land.

The party consisting of King Chulalongkorn, his sons and their staff (about 30 people) travelled northward aboard their own yacht to Härnösand. From Härnösand, the party continued along the Ångermanälven River on the steamer Strömkarlen. They went ashore in Sollefteå and spent the night at the Appelbergs Hotel.

The next day, they travelled by train to Bispgården, where they had lunch at the Tourist Hotel. Then they continued by horse--carriage on a dusty road to the landing-stage in Utanede. All along the way, the road was decorated with the most beautiful things that the lush Ragunda Valley could produce.

Lots of people had come from near and far to see and honour the exotic guests. From notes made by the King's secretary, it is obvious that the royal party felt very honoured by the people's ovations.

The steamer Liden reversed from the landing-stage at Edset, made its always dangerous but well-calculated urn in the middle of the roaring waters, and King Chulalongkorn left Ragunda municipality and continued his voyage downstream along the beautiful river down to Sundsvall.

When the dusty road near Utanede was improved fifty years later, people were reminds of the Thai king's visit, and it was consequently named ”King Chulalongkorn´s Road”. 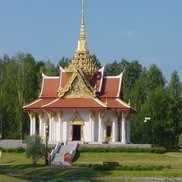 Construction of the pavilion

Thai Pavillion In the middle of 1992, a Thai folkdancing troupe visited Ragunda municipality, and they heard about the road that had been named after their king. They visited the location and were quite fascinated. In 1993 an association was formed, Föreningen Chulalongkorns Minne (FCM) which took the first steps on the project. Ragunda municipality took the initiative and in 1994, a committee was formed to ensure the progress of the work. This committee consisted of representatives of Swedish and Thai interests. The construction work started 1997.

The construction costs amounted to about 7,000,000 SEK. This does not include 3,000,000 SEK worth of decorations, such as the gilded sceptre. The project has been financed through fund-raising and sponsorship in Thailand and Sweden. The decorations have been made by the present Thai king's own craftsmen, while the rest of the building has been projected and constructed by companies in Jämtland. The floor-surface in 75 square metres the internal height is 7 metres (23 ft.) and the entire building, including the sceptre, rises no less than 26 metres (85 ft.) into the air. A stoned wall made of Jämtlandic limestone frames the magnificent white building (each stone weighs 20 kgs or 44 lbs.). Inside the pavilion is a bronze life-size statue of King Chulalongkorn. This is the only pavilion of its kind outside Thailand.

The project laid a new foundation for the development of Thai/Swedish relationships. In 1994, about 50 people were invited to visit Thailand. Among them were political, cultural and commercial representatives of Ragunda municipality. Contacts were made on government level, in national and regional administration, defence, universities, trade and commerce. Among other things, this has led to the forming of a Thai-Swedish chamber of commerce.

King Chulalongkorn Day is celebrated every year in Ragunda.