Preparations before the start of SK0YTs Youth Camp, which is based at SI9AM and Holmstagården.

Today we did the last preparations.

In the evening almost everything was ready before the start tomorrow (Friday 09). At ten a clock local time we start with refreshments. On the pictures you can see some of the stuff we had transported to Utanede.

There will be three places with radio stations. One is SI9AM´s radio shack and the other two you can see on the pictures, but we wait until tomorrow to put up the radio equipment’s.

In the education room you can see SM3FJF/Jörgen doing the last preparations.

An inquiry at District 3 meeting in Sundsvall

At the District 3 meeting in Sundsvall on March 9, 2013, SMØDZB/Tore asked if any amateur radio club in the third district could organize a youth camp. There was silence in the room for a while but then SM3FJF/Jörgen said that he could investigate the possibility to arrange a youth camp on Holmstagården in Utanede, QTH for SI9AM.

An initial proposal how to arrange the camp with estimated costs were presented to SSA, who approved the proposal and Jorgen continued the planning of an youth camp.

SM3FJF/Jörgen contacted SM3ESX/Christer who is president of the Sundsvall Radio Amateurs, SK3BG, and responsible for the Amateur Radio education in the club and he said that he could talk about wave propagation as well as helping the youth to build a dipole antenna. SM3GDT/Hans promised to give lectures on how to be QRV on PSK31 and RTTY, he also ordered a number of kits so that the youth themselves could build their first own shortwave receiver. SM3PXO/Petter promised to give lecture on "Not only FM" on the frequencies VHF, UHF and SHF. Jorgen himself were going to talk about how to be QRV on the HF bands, how to call a DX station and how to run in a contest.

The seven youths who were asked to join the camp all accepted to take part of it. These young people met once at the club station SK3BG in Sundsvall and also via Skype to get information and give their suggestions of the program items.

From midsummer until the camp started, SM3FJF/Jörgen weekly sent a newsletter with details about the weekend camp.

July 19 is a great day for all Thais, they celebrates the King Chulalongkorn's visit in Utanede, which took place on July 19 in 1897. Also at the Thai Pavilion in Utanede there are big celebrations, including a ceremony from the entrance building to the pavilion and the statue of King Chulalongkorn.

This day SI9AM celebrate with open house at the Visitor’s Amateur Radio station. This day they also mounted two extra antennas for the youth camp SKØYT.

Already in the middle of July we began to buy some of the materials which were needed for the camp. SM3GDT/Hans bought eight kits from Conrad, with a Retro Radio Receiver for 2-9 MHz.

On August 4, SM3FJF/Jörgen and SM3LIV/Ulla made the first trip to Utanede with some stuff, it was ham radio equipment, antennas, cables, ropes, teaching materials, etc.

Wednesday and Thursday, August 7 and 8

On Wednesday, August 7, we began to buy food and on Thursday Jörgen and Ulla went to Utanede with the food, and more radio equipment. Cold and frozen food we bought at the ICA in Bispgården and placed it in refrigerators and freezers at Holmstagården. Jörgen prepared the education room and two places for the youth to work ham radio.

Early in the morning SM3GDT/Hans started his drive from Ljusdal to the youth camp in Utanede. SM3FJF/Jörgen traveled from his summer QTH in Indal. SM3PXO/Petter and his son SA3BXA/Magnus drove from Aspås. SA3CEG/Henrik from Alnön picked up his son SA3CEW/Anders in Älandsbro, who was at a scout camp. SM3CFO/Michael drove from Hudiksvall and picked up SA3CFL/Olav and SA3CAY/ Emil on Alnön. From Junsele drove Robin Isaksson to Hällgum where he picked up Fredrik Westin.

Between 10:00 to 10:30 am coffee was served. At 10:30 am SM3FJF/Jörgen and the district leader SM3GDT/Hans wished everyone welcome to SKØYTs youth camp in Utanede. 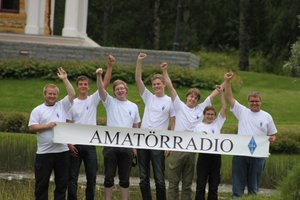 Photographing in front of the Thai Pavilion

The first group picture was taken in front of the Thai Pavilion. SM3FJF/Jörgen made a short guided tour for the youths and the leaders and they were told a little about the Thai Pavilion and King Chulalongkorn’s visit in Sweden and his trip to Utanede with the Swedish King Oscar II in 1897.

On Friday afternoon SSA’s web master SM7DZV/Erik visited the youth camp, and he got the opportunity to take some photos for SSA´s website.

The first lesson (about one hour) was about how to work amateur radio on digital modes and how to log QSOs in a computer.

After that the youths were divided into two groups. SM3GDT/Hans showed and explained how to work PSK31 and RTTY for one group, and the other group had SM3FJF/Jörgen who talked about how to be QRV on SSB shortwave.

The sked with the Youth team in Estonia was a big highlight when all the youth at SI9AM worked the four Swedish youths who were on ES7YOTA in Estonia. It was a European youth camp with 60 young people from 15 countries and their leaders. Totally about 80 people.

In the evening the youths worked amateur radio on SSB, PSK31 and RTTY. The night light was turned off about 02:00 in the night.

The youths made a lot of simulations exercises to learn how to work a DX station on SSB. The simulation exercises were a perfect way to get a good start for their own call on a DX station.

Torsten wished the youths the best of luck in the future with their hobby.

SM3GFN/Ingvar borrowed the camera and helped Jorgen to take photos. SM3GHE/Nils who had sent two guys to the camp was very pleased to see that the guys were enjoying the camp and did a good job in spite that they had not taken the amateur radio license yet.

SA3BRX/Joel and SA3BPG/Markus invited the youths to join them when they were going to work the Scandinavian Activity Contest (SAC) on SSB, which takes place on October 12-13.

One highlight this evening was the QSO with the amateur radio station HSØAC which is the head quarter station for RAST, Radio Amateur Society of Thailand. The operator on HSØAC was HSØZDX/Tony  and he did a very good job when he took the time to talk with all the youths and answer their questions. This was a fine memory for all the youths.

SM3PXO/Petter took responsibility for evening’s barbeque. He cleaned the grill and moved it to the terrace. SA3BPG/Markus laid the tables in the dining room. When SM3FJF/Jörgen said “Please take your seats” everyone was pleased to sit down and join the barbeque.

Building an own shortwave receiver

During the afternoon and the evening, the youths began to build their own shortwave receivers. A "Retro Radio Receiver" a shortwave receiver in the frequency 2-9 MHz.  An exercise they did with great precision, while half the group was building the other half worked amateur radio from the three different radio places. They worked a lot of new DXCC countries and for every new DXCC country they could make a notice in their own DXCC-list.

They worked with only 30 watts on RTTY and PSK31 on a Diamond vertical antenna temporary mounted on the terrace.

At 02.00  in the night the lamps in the bedrooms were turned off.

Presentation of SK0YT weekend camp in Utanede on the web

SM3FJF/Jörgen took a lot of photos during the weekend camp and also some of the gust visitors used the camera when Jörgen was busy with teaching. Photos were sent to Sara, who is YL to SA5BJM/Johan, SSAs Youth Section Leader and also send to SM3LIV/Ulla. Both continuous published the photos on http://sk0yt.blogspot.se/ and on www.si9am.se.

The youths thought it were a very  early morning when they one after one came to the breakfast. They were tired but ready for a new day.

At 08.00 SM3FJF/Jörgen made a brief summary and answered some questions which had come up during the days.

At 08:45 SM3ESX/Christer and SM3EFS/Lennart arrived. Already in June the youths wished to learn more about SDR-Radio (Software Defined Radio). Now SM3ESX/Christer held a lecture about it, which was much appreciated.

The last lecture during on this camp was "Not only FM", and it was SM3PXO/Petter who talked about wave propagation and also about CW and SSB QSO traffic on VHF, UHF and SHF. Also this lecture was much appreciated and now they have got more knowledge about frequency space and amateur radio traffic on the higher frequency.

Help in the kitchen

SM3EFS/Lennart did a good job in the kitchen. He washed the dishes, made coffee to the first break for the day, laid the tables and warmed up the food for the last meal this weekend.

After lunch, all youths gathered in one room and the leaders in another room for an evaluation of the weekend camp.

The last hour everyone cleaned up the hall, the toilets and bedrooms on the upper floor and the radio rooms and the conference room on the lower floor. The camp ended at three o'clock in the afternoon with a group photo of the youths. On the picture you can see how the youths leaves the camp.

The way forward in life - with AMATEUR RADIO in the backbone. 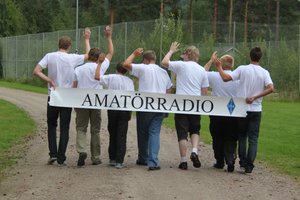 Some citation from the youths evaluation about SKØYT:

• Good food, the coffee break intervals were very good planned so that

there was no time to become drowsy

• The Web – Funny that other people can follow what's going on!

Good to show that there was activity

• We liked to be divided into two groups

• Fun with sked QSOs and to work the Estonia camp!

• Simulated QSOs was good for us that needed practice radio talking

before we worked on the bands

• Fun with the guided tour at the Thai Pavilion

• The information about running split was very good

• Not so good with early mornings?

• Good that there was a lot of technology

• To build a receiver was fun

• Fun with a SSA shirt (but check the size before)

Statement from the youths

A big thank you to SSA. We are very satisfied. The leaders have done a great job. Fantastic and nicely planned and performed.

In the gallery below you can see what the young people did during the weekend.

This autumn day was devoted to clearing of undergrowth around the two antenna masts on SI9AM. The work was done by SM3JVJ/Lars, SM3LJA/Kent, SM3EFS/Lennart and SM3FJF/Jörgen.

Now everything is ready to begin the antenna works on 30 and 31 August.

Work during the weekend on SI9AM

A new cabinet was installed to make space for all feeders from all the eight antennas to the antenna switch.

In the old cabinet we only have the terminal strip for rotor cables.

We had rented a sky lift to demount and rebuild the fixed 14 MHz beam and change the direction of the beam to the south about 170 degrees.